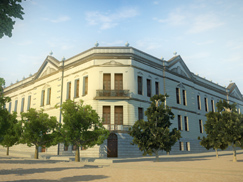 With the CMBH Pro Memory Project game, developed by the NetService team at CMBH, it will be possible

Part of the NetService staff allocated in the City Hall of Belo Horizonte (CMBH) is involved in Pro Memory CMBH Project, an initiative of the entity that intends to recover, preserve and publish the history of the legislature in the context of Belo Horizonte.

The project began by publishing the book Cyclones and Macaréus – The parliament in the history of Belo Horizonte, and in addition, Pro Memory CMBH -. Belo Horizonte in 1911 game will be released. Projected in a digital game platform, it will provide users the opportunity to take a virtual walk through the city scene in 1911. “After publishing the book, there was a requirement to expand the knowledge that came up there. The game language was greatly popular among children, youngsters and teenagers, which facilitate publishing information to such public,” explains the project art coordinator, Rafael Guimarães.
Through the interactive virtual tour, as players go around the city, they can interact with people, get information about historical buildings, play minigames and thus gain points to advance in the scenario. In order to build the platform, an extensive research is carried out for almost two years, through partnerships with the Public Archives of BH, State Public Archives and Abilio Barreto Mining Museum, in addition to private collectors.

The first stage of the scenario construction displayed the Liberty Square and the second, the construction of the Alfonso Arinos Square, which was then called the Republic Square. “It is a complex and slow process, but very enjoyable. We hold several online and in-person meetings to adjust the details of art and programming. It is not uncommon to find new historical information, which leads us to make some changes in the visual parts of the game,” says Rafael. The team is finishing off the Station Square to finally launch the game, scheduled for mid-May. It will be available for download on the Internet and will be distributed to public agencies and museums.

Welcome to 1911
There are two reasons for choosing the period of 1911 as inspiration for creating the virtual tour scenario: the first is due to the fact that, up to that date, the Resolving Board (which nowadays is equivalent to our Town Hall) does not have its own headquarters (which was completed in 1912). The second is due to the discovery of an album of photographs the publication of the city in the same year, which provided visual and historical information that contributed much to make the project possible. The introduction screen and the visual program of the game pay a tribute to this album.