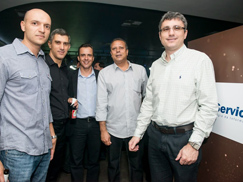 NetService participated as corporate sponsor of the Annual get-together of Sucesu, on December 16th , gathering about 600 people at the Woods Bar BH. At the bar lounge, the company received customers and partners to discuss, among other issues, the prospects to 2015. The group The Trail Band provided the music, which raised the crowd to the tune of old movies sound tracks.

The annual party is a time for new businesses, interactivity, entertainment and networking with the most influential names in the technology sector of Minas Gerais.