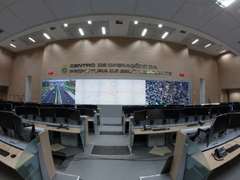 NetService concluded in late May, the Professional Visualization System (Video Wall) of the new operations center of Belo Horizonte City Hall (COP-BH), where they will be concentrated the strategic actions of traffic and security during the World Cup. Held in partnership with the Mitsubishi Electric, the project included the installation of 20 rear projection cubes of 80 “, forming a single screen of 16 meters wide and 2.40 meters high, which will provide to the public administration bodies, to monitor, in real time the traffic, urban mobility and security in the city Capital.

For the project, NetService provided and installed all the items that make up the video wall, such as the support bases of the cubes, the hardware of the system (composed by cabinets, engines, screens and controller devices), management software, fairing (side finish), signs and digital watches. In addition, the company conducted the trainings and assisted operation for operators of the new equipment.

“The deadline was a big challenge, because the system needed to be ready before the start of the World Cup. Whereas the project involves special and imported products, variables related to import procedures and logistics have become a critical path, “says the project manager, José Carlos Rodrigues. To overcome these obstacles and ensure that everything’s working as planned, a joint planning took place with all partners and the client. To ensure delivery within the agreed time limit and to avoid storing and handling between warehouses or places of custody of goods, the equipment began to be assembled soon after unloading from the trucks “This job comes to ratify NetService competence to act with special projects, which impose challenges beyond the trivial. It strengthens the company’s ability to add value to our customers and is a source of pride for employees “, complete José Carlos