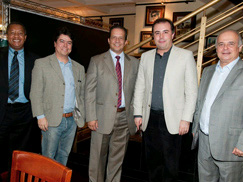 NetService participated, as a sponsor, in the end-of-year party of Sucesu Minas 2013. During the event, held on December 10, at Hard Rock Cafe, in Belo Horizonte, representatives of the company’s commercial team met partners and customers in a relaxing conversation and, at the same time, for networking.

With more than 400 guests, the event also celebrated the 45th anniversary of Sucesu Minas, an entity created to represent companies and professionals that operate the Information Science and telecommunications sector of Minas Gerais.