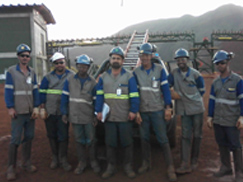 Samarco is investing in its Fourth Pellet Plant Project (P4P), an initiative that will enable to expand its industrial facilities, with the construction of its fourth pellet plant, its third concentrator and a new ore pipeline, from Minas Gerais to Espírito Santo. In this context, NetService was selected to provide all services and materials for the implementation of network access points in the electrical rooms, as well as network assets to enable the communication between UBU, Germano and Adutora units.

The agreement started in February in will end in December 2014, and in this period, NetService will implement around 450,000 meters of optical fiber, interconnecting all units included in the project with the electrical rooms. “This service is the backbone for the project automation. Without it, there is no communication between the valve units, the pump units and all electrical rooms”, says Fernando Silva, the presales analyst responsible for this contract. “The purpose is to ensure efficiency and improvements of the data traffic technologies between Samarco’s automation units”, he says.