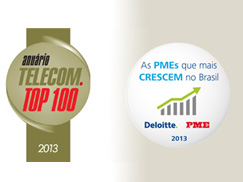 NetService has just won two more important awards. For the seventh year running, the company is among the Small and Medium Enterprises with Highest Growth in Brazil according to a survey conducted by Delloite in partnership with Exame PME magazine. During the award event, held August 18 in São Paulo, the results of the 8th edition of the survey highlighted the profiles of the entrepreneurs at those organizations that made the ranking throughout the 8 years of the study.

NetService is also in the TOP 100 of the Telecom 2013 Yearbook. The award ceremony took place on August 28 in São Paulo. The team the produces the Telecom analyzed all the data under the supervision of teachers from the Getúlio Vargas Foundation of São Paulo.