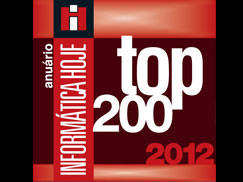 NetService is 89th in the ranking of the 200 biggest IT companies in the Brazilian market. That is the result of the study conducted by the Informática Hoje Yearbook 2012, at the award ceremony held at Club A, in São Paulo.

According to the survey, the company grew 62.93% compared to last year, moving up 18 positions among the biggest domestic IT companies. NetService also improved its position in the ranking of the best IT integrators, occupying 13th place today among the 37 best evaluated in the study, moving up two positions compared to last year.
“We are very proud to be among the best IT companies in Brazil. We intend to continue growing and bringing our clients the best solutions in technology. Winning this award shows us we are on the right path and gives us even more incentive to continue developing,” says the CEO of NetService, José Moreira de Araújo Neto.